Their enthusiasm is contagious.

I had the pleasure of interviewing the two men behind the upcoming musical event, “The Blues Box” —producer Blue Haas and music director DC Duncan. This grand event begins at 7 p.m. on Saturday, November 3 at the County Fairgrounds  and will transport Pagosans back to the 1920s era of speakeasy bars, music, and gaiety.

For the uninitiated, a speakeasy was an illegal hideaway where one could purchase and drink alcohol, and enjoy unbridled camaraderie during the Prohibition era (1920-1933).

How did the concept of producing a blues concert in a speakeasy come about? Haas explained, “Last February I produced a Valentine’s Day fundraiser for the Pagosa Springs Arts Council. DC was in charge of the band. I talked to Ursala Hudson (president of Pagosa Peak Open School board) about doing a blues concert as a fundraiser for the school. Ursala was excited about the idea, and asked that the fundraising event be Prohibition-themed. I agreed.

“This is a one-night pop-up show. We’re going to turn the Exhibition Hall into a Prohibition Hall. There’s going to be lamps on stage, a bar, local beer, wine and spirits served. Old style drinks from the Prohibition era will be served in Mason jars. We’ll have a mug shot photo booth and a Paper Moon photo booth.

“It will be a speakeasy with mismatched furniture and couches. Bar service at the tables. Bar tenders from Riff Raff. A [faux] cigarette girl. A hat and coat checker. It’s about authenticity and feeling that you are back in that time and about renewing the art of celebration.

“DC Duncan has put together the best musicians around for this genre. We have a full production.”

DC Duncan added, “When Blue asked me to be musical director, I jumped at it. That’s my realm. I’m going to make this tight with no dead air. Everything has a place, and it has a flow that is directed at the audience… not at the players. It’s going to be a terrific show.

“We’re modifying the shell of a vintage piano, a spinet. Inside will be a modern electric piano that will get the tones we want. Kirk James is playing an ancient guitar. Bob Hemenger will be playing soprano sax on the Bessie Smith material. Faith Evangeline is just a talent to behold, and a vintage costumer. She also started an organization that works with World War II vets.

“Picture this. You’re in the audience. A vintage spotlight comes on. The band will start with an instrumental to get you in the mood. Then Blue walks onstage, dressed to the nines. We bring out Bob on sax. A couple of songs later, we bring out Faith, and that’s when things kick into high gear. Kathy Keyes will perform. She sang at some of my John Graves tribute concerts. Casey Crowe is lead dancer, and Nicole DeMarco from KWUF is Emcee.

“We want the audience to be part of the set. They are the set. Go online and look at clothing for that period. A head band or feathers for the women. Check out our local costume shop, Costume Pit Stop.”

Blue Haas commented, “Musically we’re from Prohibition up to the ’50s. We’re using history in regards to music, culture and fashion, while creating good vibrations to raise money for a worthy cause.” 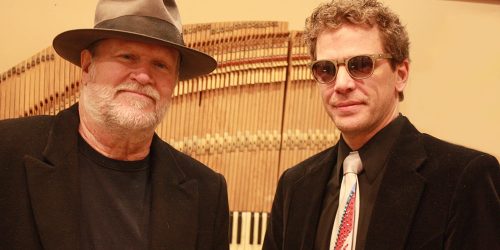 Ursala Hudson is the Pagosa Peak Open School coordinator for ‘The Blues Box’ and says the proceeds will be used for Place-based education and Project-based learning program funding. “PPOS is a non-profit charter school. Although charter schools are state-funded and receive nearly the same per pupil revenue as the other District schools, we have overhead costs that the conventional public schools do not have, such as monthly facility lease payments. Therefore, a significant amount of our operating costs depends on private donations and grant funding — as well as fundraising efforts.

“The ‘Music Hall’ will be an annual fundraising event for the school. ‘The Blues Box’ is the inaugural event featuring a 1920s prohibition theme.”

To purchase tickets for ‘Blues Box’, or to learn more about the event, please visit www.psprohibition.com.