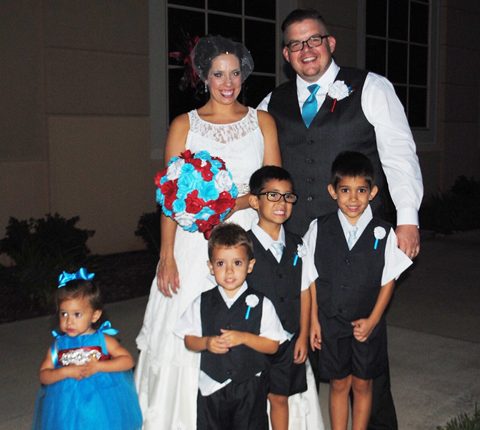 When Perry Davis Harper first performed at Thingamajig Theatre in 2014 in the starring role of Jean Valjean in “Les Miserables,” audiences at the Pagosa Springs Center for the Arts were mesmerized by his stage presence and powerful voice.
Five summers later, Harper is back in Pagosa playing the title roles in “Jekyll and Hyde: The Musical,” another production that is an ideal platform for his amazing voice. This time, he brought his wife, Amelia (Amy to her family and friends), an accomplished actor in her own right and one of the stars of “Mamma Mia,” and their five children, two of whom are warming the hearts of everyone in the theater as they play the young Tommy at different ages in “The Who’s Tommy.”
Are they the start of Thingamajig’s own acting family dynasty? If yes, it will be a local dynasty, as the Harpers have moved to Pagosa full-time.
The story of how they met, married and moved to Pagosa could make a romantic musical.
After performing several times at Thingamajig in a variety of roles, and traveling the U.S. for both operatic and musical theater roles, Perry got a full-time job in Branson, Mo., at the Sight and Sound Theatre, which specializes in producing Bible stories for the stage. There he met Amy, who had acted with Sight and Sound for 10 years.

Their love affair never missed a beat, even though Amy came with four little children: Christian, now 9; Daniel, 8; Gabriel, 6; and Ana, 4. Perry and Amy married in 2016 with the kids as their ceremony attendants and soon they were calling Perry “Dad.” A year later, Perry and Amy added son Cooper to their family.
With Perry and Amy’s impressive theatrical pedigrees, it’s no surprise that acting, singing and dancing are a vital part of Harper family life. The parents’ resumes are stellar, and Christian also has credits, having played two parts in Branson.
So, it seemed only natural this summer that Christian play the part of young Tommy at age 10. When he grows up, he wants to be either an actor, singer or chef — and, with his talents, maybe he could handle all three. He loves helping his parents practice their lines. Brother Gabriel, who just graduated from kindergarten, plays Tommy at age 4, his first stage role. Both Christian and Gabe also had roles in the kids’ camp show “Aladdin Kids.”
Not to be left out, son Daniel and daughter Ana helped distribute programs and conversed with arriving audience members at opening nights of this summer’s wonderful Broadway musicals at the Pagosa Springs Center for the Arts. Daniel wants to be a baseball player when he grows up. Ana loves to dress up and wear fancy shoes, so you have to wonder if we’ll see her on the stage in the future.
Thingamajig co-founder and artistic director Tim Moore is one of Perry’s greatest fans.
“When I first auditioned Perry in 2014, I knew he was something extraordinary. Not only is he a once-in-a-lifetime vocalist, but more important, he was actively seeking ‘community’ and meaningful artistic endeavors,” Moore said. “Perry is one of those unique performers you meet who you instantly want on your team. He inspires greatness with his commitment to excellence, is an amazing collaborative partner, and cares deeply about the work and the people he’s surrounded by. I can’t imagine this summer without him.”
Almost from the moment Perry first met Amy, he told her about his love for Pagosa — the warm and welcoming people in our community, the spectacular scenery, the outdoor lifestyle including golf, and,of course, Thingamajig and its enthusiastic patrons. Now they have achieved their goal of moving here permanently.
Perry has founded a youth conservatory at Thingamajig to introduce youngsters ages 8-18 to all aspects of the theater and has been hired to teach music and performing arts at the Pagosa Peak Open School, our local charter school. He also has launched a video production company for communications via video and social media. He already has several local business clients, one being Laura Moore, co-founder and executive director of Thingamajig.
She hired Perry to create a comedic four-video series in praise of Seeds of Learning as part of her participation in the Dancing with the Pagosa Stars fundraising event for the school last month and it won first place.
Meanwhile, Amy will be working at the theater and the whole family will have performing opportunities at Thingamajig. They are living in the old actors’ house.
“From the moment we got here, everyone loved Pagosa,” Perry said of his new family. “The kids have made so many friends already. Even before Amy and I made the commitment, they were asking us, ‘Are we moving here?’ So we know we’ve made the right decision.”
Added Amy, “Visiting Pagosa Springs has been an experience for our family to remember. Now moving here brings more joy to our home.”
Tim pointed out that this summer, Perry “brings down the house more than once with his show-stopping numbers and he’s worth the price of admission alone.”
As if that were not enough, there’s the added benefit of his new family to the Thingamajig stage.
“Then add in all our amazing performers this year, it might be the best summer yet in terms of raw talent. I love these performers,” Tim said.
Thingamajig Theatre Company is an award-winning professional nonprofit 501(c)(3) theater in residence within the Pagosa Springs Center for the Arts. Its talented actors, directors and designers come from across the U.S. and around the world to produce musicals, comedies and dramas year-round.

(This article was originally published in The SUN’s PREVIEW. PPOS has permission from the author to present the article on our site.)

A Close Look at Life