After noticing the disappearance of the kindergarten Roxaboxen area, Ms. Polly made a plan.

“How do you feel about my group working to fix this space up?” she suggested. She had a group of first and second-graders looking for a project. The kindergarten space had been dismantled, and disappointed 5- and 6-year-olds were wistfully reminiscent about their outdoor town. When I shared Ms. Polly’s idea with the kindergarten, they were ecstatic, and quickly wrote a letter to Ms. Polly and her students with suggestions for improvements. The major focus? An ice cream stand.

For weeks this small group measured, cut, glued and painted. Finally, an ice cream stand was constructed and students were ready to sell and purchase ice cream.

“We will sell the ice cream for one dollar,” Tevye said. “But not a real dollar, just something like a dollar. And if it’s small like a dime, you might have to give us ten of them. But if it’s gems, those are worth more.”

This announcement spread like wildfire. Students throughout all grades began making their own currency, offering to help, and collecting items like Pika Tickets that may equal a dollar.

The next step was to determine what would be sold. “Well, we can make four kinds of ice cream,” they suggested. Hanging on the front of the ice cream stand were four ice cream cones: one brown, one white, one pink and one orange. While “orange” was originally “mystery flavor,” it was finally decided to be cantaloupe and the other three represented the classics: chocolate, vanilla and strawberry. Students broke into groups, working on different tasks associated with ice cream making. Two days later, they lined up with currency in hand, waiting for a taste of their collective efforts. 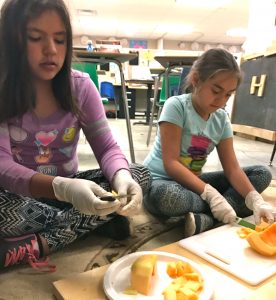 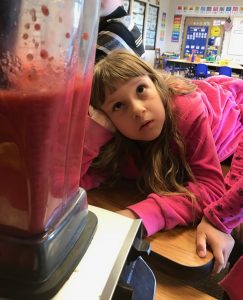 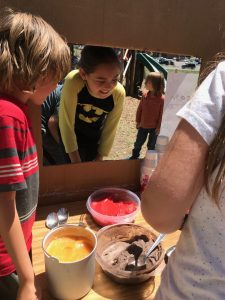